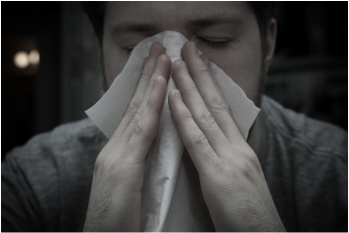 Here on the west coast, sunshine, melting snow and blossoming flowers puts a smile on most of our faces. But for many, this change also signals the beginning of a most unwelcome time of year. Allergy season.  For those that suffer, it means itchy watery eyes, scratchy throat, sneezing, sinus congestion, fatigue, eczema, and (worsening) asthma.

Spring allergy symptoms according to TCM are seen as a response to ‘wind’ (the elemental factor associated with Spring) and other environmental factors in the same way as a cold or flu is a response to a viral infection. This ‘Spring Wind’ affects those who are said to have a weak defensive layer called Wei Qi.

Both acupuncture and Chinese herbs have been used for thousands of years to help boost the body’s defensive layer to prevent colds and flu in winter, and allergies in the spring/summer.

1.  Alleviate symptoms such as itchy eyes, stuffiness, headaches and fatigue

3. Bring the body back into balance by helping to regulate the various mechanisms responsible for homeostasis

1.  Jing Jie (Japanese Catnip) is used widely for allergies, normally in conjunction with other herbs to treat allergic symptoms.

2.  Huang Qi (Astragalus): A classic tonic used in many formulas to treat chronic weakness and/or deficiency of Qi. It is included in a 'famous' formula called Yu Ping Feng San (Jade Wind Screen Formula) to strengthen the body's defense against invasion of 'wind' in the spring and winter. (People who have autoimmune disease such as rheumatoid arthritis or Crohn' s disease should not take astragalus without consulting with their doctor. People who take lithium or drugs that suppress the immune system should not take Astragalus)

1. Lactobacillus acidophilus, and Pro-biotics - have shown to have some beneficial effect in the treatment of allergies (especially food related).

2. Quercetin -- Quercetin is a flavonoid, a plant pigment that gives fruits and vegetables their colour. It has been shown to help in the release of histamine.

3. Spirulina -- a type of blue-green algae, may help protect against harmful allergic reactions. Spirulina stops the release of histamine, which contributes to symptoms of allergic rhinitis.

For temporary relief of nasal congestion and itching, press or massage these few points for a few minutes several times a day.

2. LI 20 (Ying Xiang) located on either side of each nostril

3. LI4 (He Gu) located on the back of the hand in the fleshy part between the thumb and first finger

The aim of Traditional Chinese Medicine (TCM) in treatment is to address the causes of disease (allergies), treat the whole person, and focus on balancing the immune system to create long-term health benefits. 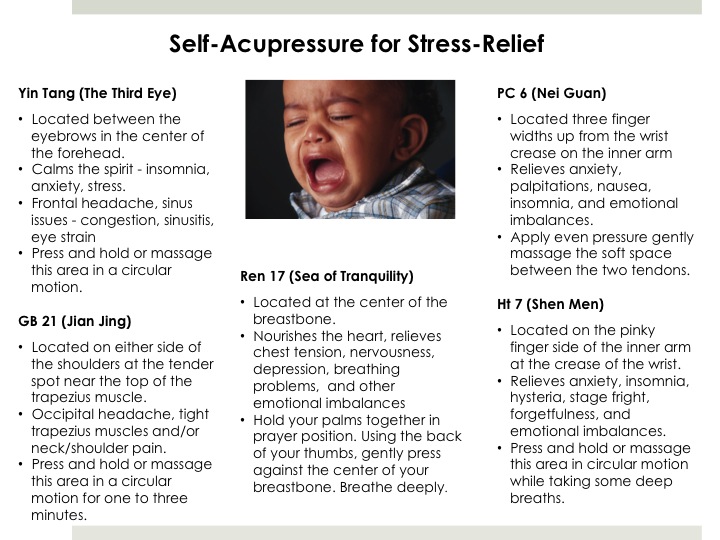 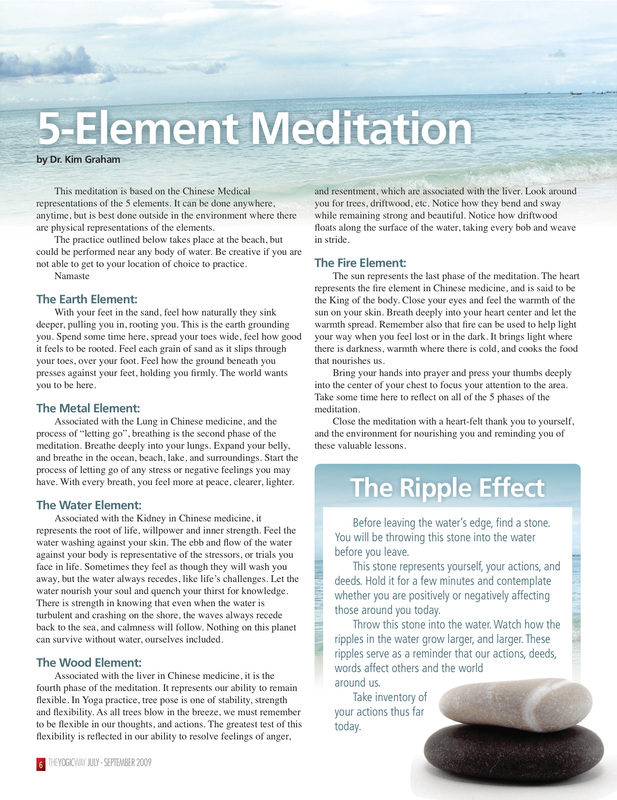 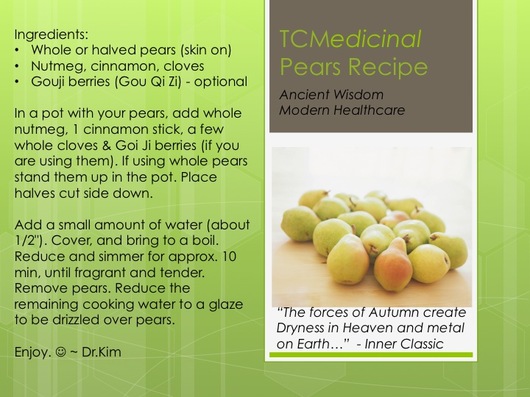 Typically prescribed in the Fall as it is classically considered to be a season of ‘dryness’, Pears are believed to help regenerate body fluids, quench thirst, calm the heart, lubricate the lungs and throat, as well as relieve restlessness, promote urination, clear heat, mucus and relieve cough.

This classic recipe is used to help protect the lung against the dryness of the season, or to treat existing dryness (like dry cough, sinusitis with dryness etc). 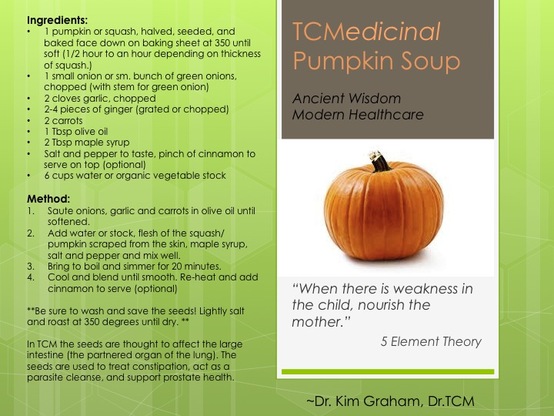 In Traditional Chinese Medicine, autumn is represented by the metal element, which corresponds to the Lungs and Large Intestine. Weakness in this element shows up as ailments in the Lung and Intestines: allergies, asthma and constipation. The remedy can be found in the season's most notable food: the pumpkin or squash.
Dr. Kimberley Schneberk, Dr.TCM Google Analytics